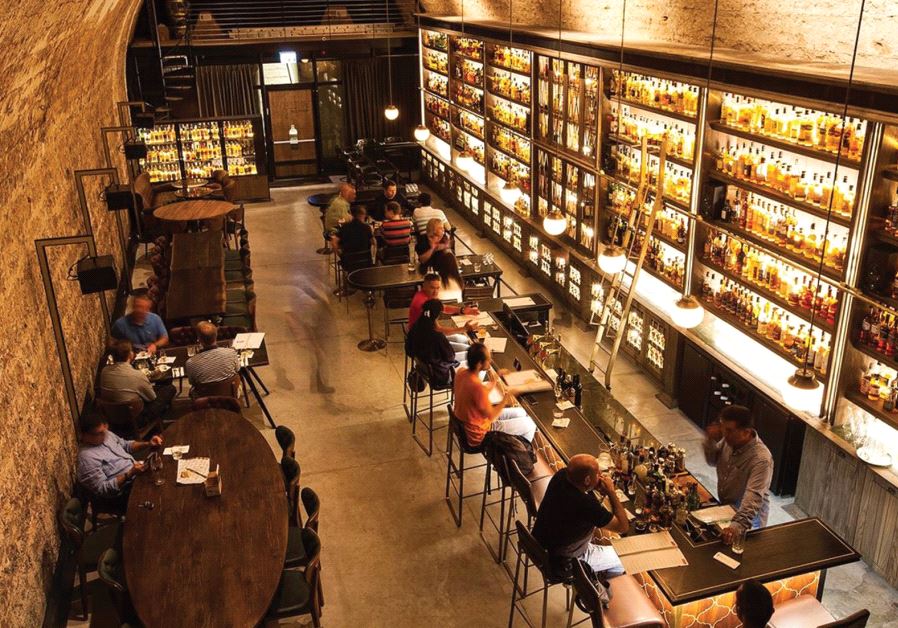 The latest attraction for connoisseurs in Sarona is the largest whiskey museum in the Middle East and fifth-largest in the world. Situated in a former Templer wine cellar, the museum features an impressive display of hundreds of illuminated whiskey bottles, including one that is worth NIS 40,000.

Naturally, the whiskeys are meant to be enjoyed not just visually, at an elegant bar, several high tables and a few regular tables. If you want a seat at a normal table, it pays to reserve in advance.

Considering that the Whiskey Bar and Museum is exactly the kind of place where Israeli businessmen might take foreign visitors out for an interesting evening in cosmopolitan Tel Aviv, it is rather bizarre that while the food menu is in Hebrew and English, the whiskey tasting menu – arguably the keystone of the restaurant’s offerings – is in Hebrew only.

Similarly, the menu of four specialty cocktails (NIS 38), all based on whiskey, lists the names of the cocktails in English only, and the ingredients of each cocktail in Hebrew only.

Our waiter recommended the Monkey Penicillin and the Founder’s Sour. The former – a blend of Monkey Shoulder whiskey (itself a blend of several whiskeys), ginger syrup and lemon, with a float of smoked whiskey – was enjoyably complex, with a nice bite from the ginger.

The latter – Glenlivet Founder’s Reserve, honey syrup, lemon, egg white and Angostura bitters, served in a highball glass and garnished with orange peel – had a less distinctive taste but was more refreshing.

The pure whiskey tastings, starting at NIS 61, were clustered in flights of four small snifters, each representing a different country. The expert staff provided water droppers and an explanation of the recommended tasting process. Each tasting adds up to 100 ml (4 x 25 ml) of liquid amber, which does not look like much but is actually enough for two people to share.

We started with the liver pâté (NIS 52) – three large scoops of creamy, spreadable pâté, accompanied by fig preserves, berry jam and whiskey aioli. The incredible richness of the pâté was simultaneously cut and enhanced by the sweetened fruit, resulting in a heavenly dish.

Next came the gray mullet carpaccio with whiskey aioli, roasted pistachio, cherry tomatoes and radish (NIS 58). While the seasoning threatened to overwhelm the razorthin slices of fresh fish, the combination of ingredients still managed to come together in a nice interplay of flavors.

We had ordered the house bread to accompany our two starters; however, as it turned out, the pâté came with toast points, and the fish carpaccio with toasted split baguettes, so the bread was not really necessary.

The first main course was a charcuterie plate in two sizes (NIS 68/96), so it could be an appetizer or a main dish. The three meats comprising the assortment were bresaola, sirloin steak and smoked chicken breast, served with toast points, mustard, half-sour pickles and assorted olives. The bresaola was more moist than the air-dried delicacy tends to be, but it actually tasted like corned beef, so it was not a disappointment. The sirloin and chicken were equally flavorful, and even the smaller plate was large enough for two to share.

We could not resist trying the prime rib (NIS 48 per 100 grams), which is served in so few places. The minimum size was 600 grams, so it was obviously meant to share. We were not asked how we wanted it grilled, but it was came out mediumrare, which was just what we wanted. The juicy, succulent prime cut was worthy of an upscale steakhouse.

When it came to the dessert menu, the heading was in English, but all nine desserts were listed in Hebrew only. We elected to share the chocolate mousse with chocolate streusel, mango jelly, golden brownies, and a dropper with which to drizzle smoked whiskey over the top (NIS 42). One squeeze of the dropper let loose a mighty squirt, but the small goblet of thick mousse would satisfy any chocolate craving.

The Whiskey Bar and Museum is not only the place to sample whatever world-class liquor you fancy, but it also boasts a kitchen with talent commensurate to the exhibits.

The writer was a guest of the restaurant.